In Seafood restaurants, seafood is the main dish; it contains an essential source of protein in many diets around the world, especially in coastal areas. Humans consume most of the seafood harvest.

There are seafood restaurants all around the world. Many people ate fish in those restaurants. Seafood is the most important source of high-quality protein in the world, accounting for 14–16% of all animal protein ingested. Over one billion people rely on seafood as their major source of animal protein. 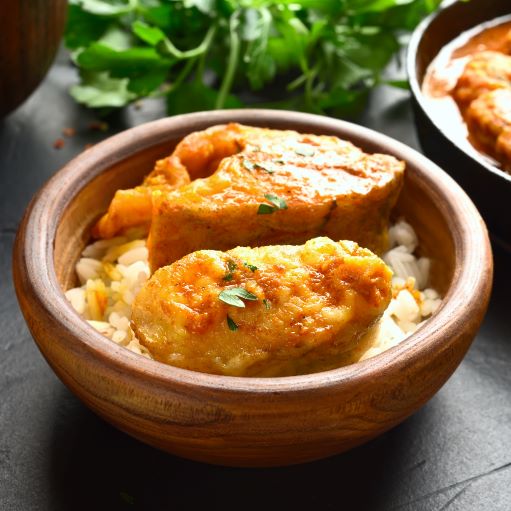 Are you aware of the benefits received by consuming fresh seafood?

From high levels of antioxidants to essential omega oils, the benefits are endless! While it is common knowledge that fish is a high-protein, low-fat food that can provide many health benefits.

In seafood restaurants, seafood containing Omega-3s, iron, B and D vitamins, and protein are all important nutrients for overall health and wellness at all ages. In addition, fish and other seafood provide nutrients, minerals, and omega-3 fatty acids, which are necessary for strong bones, brain development, and a healthy heart and immune system.

South Indian cuisine is a land of exotic fishes and seafood. A tremendous variety of fish and other seafood products are available in the coastal water areas.

Compared to the other popular dishes, seafood is very famous for its taste and short cooking time. In south Indian cuisines, more recipes were about seafood; Seafood is very delicious and easy to cook with special Indian spices and herbs. 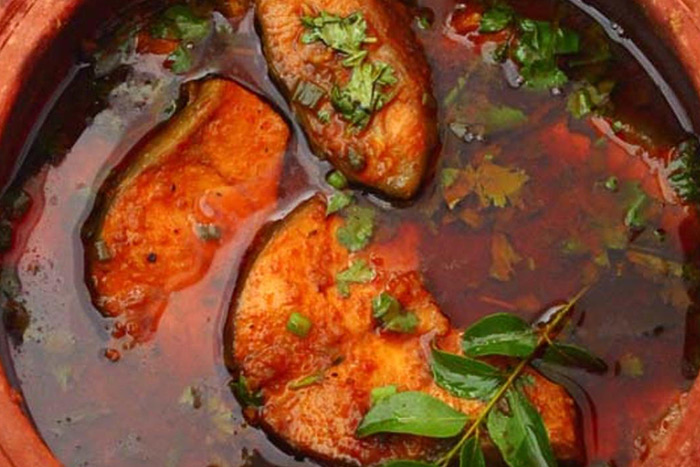 Seafood restaurants made their masalas with a lot of spices and tomatoes, which people included in these dishes. These masalas have a strong flavor and aroma. When mixed with Coconut Milk in a gravy style, the masala becomes rich and delectable.

Fish marinated in a mixture of aromatic spices that permeate into the fish and impart a particular fragrance.

People used fresh spices such as curry leaves, coriander, Kashmiri chili, and others to make the seafood curries in Sea Food Restaurants. The Seafood, such as fish, prawns, or crabs, is then put into the curry and set aside for a brief amount of time to ensure good mixing. As a result, the texture is smooth and creamy.

Kerala is a coastal state on the Malabar Coast, the southwestern edge of India. Here, fish and seafood play a more significant role in Indian cuisine. So it contains many seafood restaurants; fish is one of the most important ingredients in Kerala cuisine.

In Kerala, coconut-based gravy used for fish curries. Every coastal state of India includes fishes in almost every cuisine. Fish curry is very popular, and its taste with rice is delicious. The most popular seafood in Kerala is fish, crab, and prawns.

Savoy’s is a famous south Indian restaurant in Edmonton, Canada. Food prepared in savoys had an authentic touch of Kerala.

The following is a list of the many varieties of seafood available at Savoys.

Prawns, also known as chemmeen. Chemmeen thenga kothu is a traditional Kerala dish made with coconut stripes and kudampuli. Without these two key ingredients this curry would be incomplete. They mostly made this curry in an earthen pot, which gives it a unique flavor. 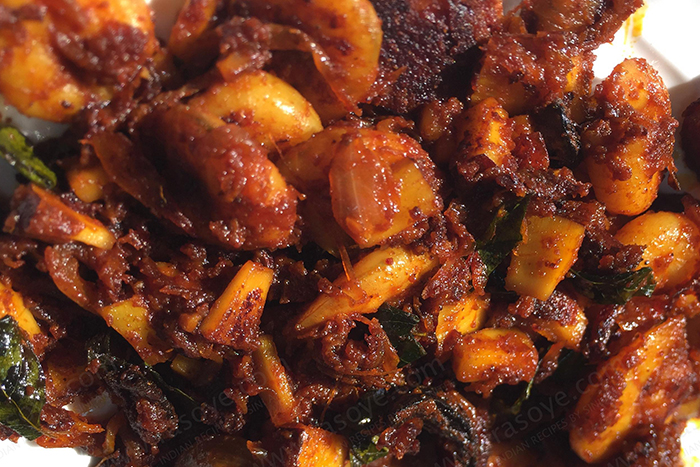 Chemmeen It’s also known as shrimp or prawns. Coconut milk curry is a Thrissur, Kerala-based dish with Rice, Appam, and Pathri or roti.

In this dish, they cooked the prawn shrimp in coconut milk with other spices, making the dish delicious. 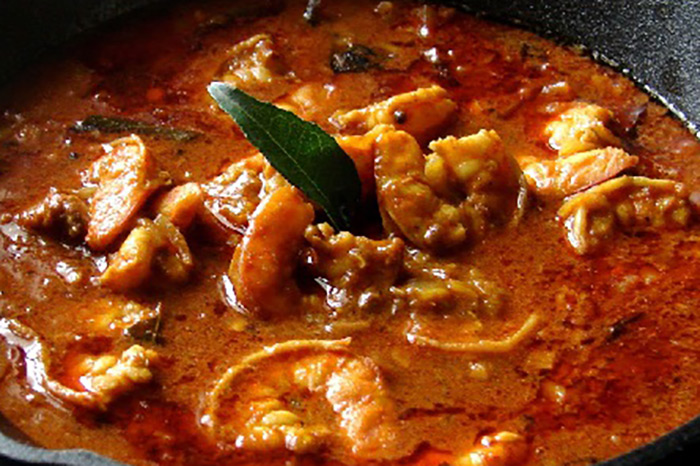 It is another delicacy in seafood. It is a creamy and rich, mildly spiced fish stew made with coconut milk, tomatoes, Green Chilies and Pepper.

This dish is a mildly spiced fish stew made with coconut milk, usually served with Appam or bread. Using green chilies and black pepper keeps the heat subtle, while the coconut milk makes it creamy and rich. And, of course, the aroma from the fresh curry leaves takes the whole dish to the next level. No wonder it’s a tourist favorite. 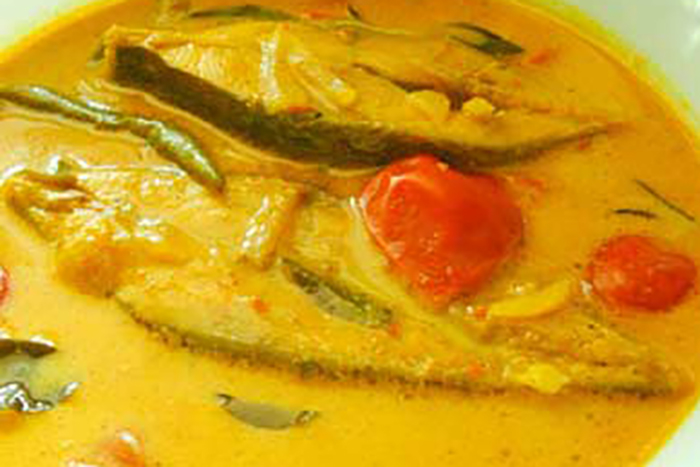 Prawn Masala is a quick and easy recipe that is delicious, aromatic, and spicy. It tastes best when eaten with roti or rice. It’s a wonderful starter or side dish. 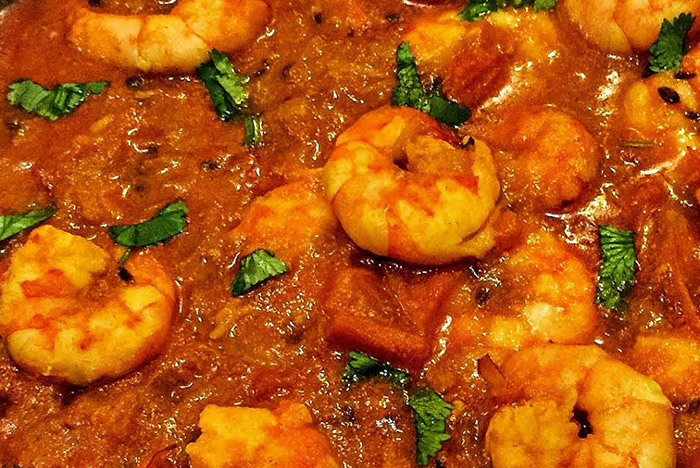 The delicious tang that mangoes impart in the sauce makes this dish so good. In addition, with ginger and coconut, it just gets better. The Kerala meen manga curry is tangy, flavorful gravy that goes well with hot rice. 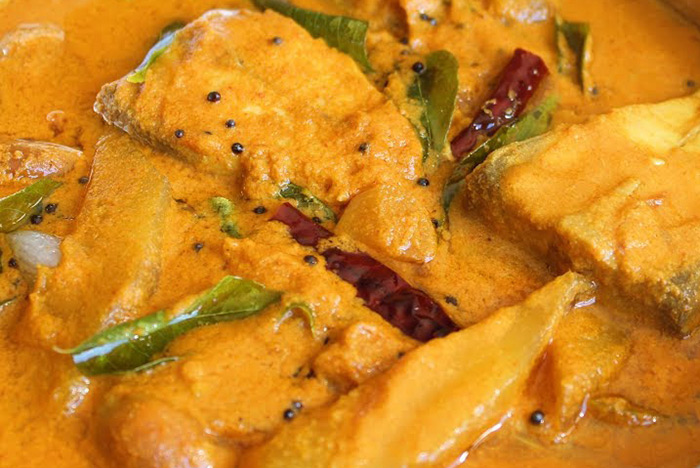 Nadan Meen Curry, also called Kerala Fish Curry, is a spicy Kerala fish curry cooked with “Kudampuli.” Kudampuli, also known as “Meen Puli” or “Fish Tamarind.” It is a popular ingredient in fish curries because of its health advantages.

Folklore holds that fish curry cooked with kudampuli lasts longer. And, traditionally, this fish curry is cooked in a “man chatti.” or clay pot. Kudampuli, shallots, and curry leaves give an authentic taste to fish curry. 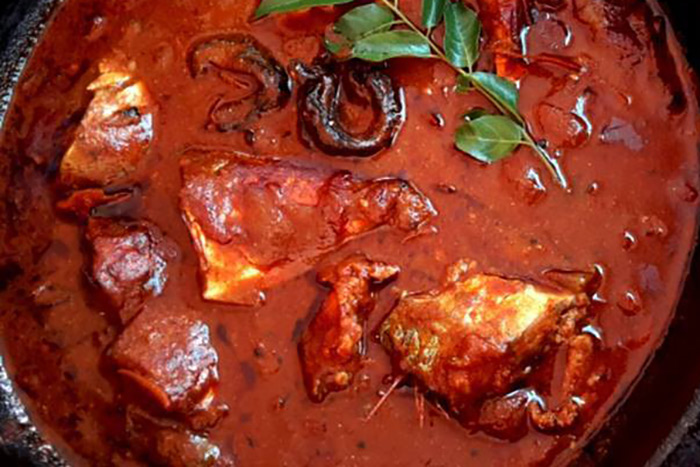 Pakoras are a popular deep-fried snack dish in India, typically prepared with vegetables. Still, nothing should stop you from experimenting with meats, chicken, and fish, as in this recipe.

This appetizer dish is prepared by dipping the items in a seasoned flour batter and then deep-frying them until golden brown. Every region has its variation for pakora batter, and this recipe reflects the flavors of North India.

In Savoy’s, we are having more tasty fish pakora. The batter layer on the outside will be crispy and crunchy. Fresh finger-shaped sliced fish, seasoned with spices and herbs, makes up each inner layer. This marination turns the fish into something juicy and delicious. 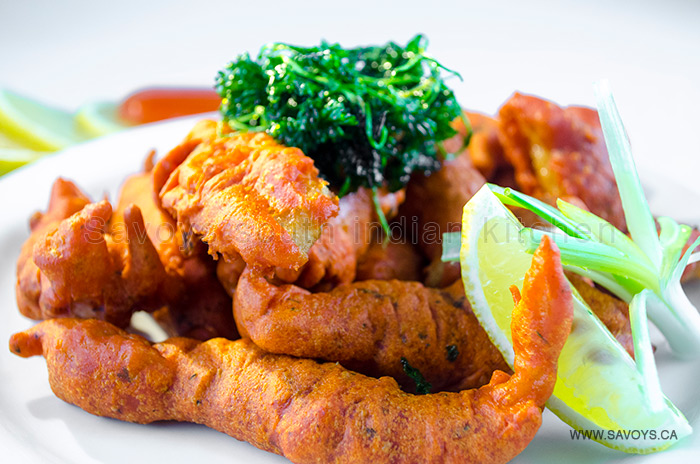 Biryani is a combination of the words “Bryan” and “Bring.” Biryani is a Parsi word, which means fried before cooking and stands for rice.

Traditionally, this was a meat meal. However, as time went by, people incorporated additional ingredients, like fish and vegetables, into preparing Biryani, and people accepted the modifications.

Biryani rice is aromatic and seasoned with spices. Cooked rice, whole spices, and salt in a large pot with lots of water to make this meal. The best way to achieve this is to boil water with salt and whole spices, like cumin, cardamoms, pepper, bay leaf, and other herbs and spices.

There were different varieties of Biryani prepared using seafood, such as fish and prawns mentioned below.

In any other biryani, Hyderabad’s dum-based biryani is legendary. Fish biryani is a rice dish prepared with basmati rice, spices, and herbs served in layers. Chicken or mutton is the most frequent meat used in Biryani. For seafood fans, though, this was a pleasant surprise. 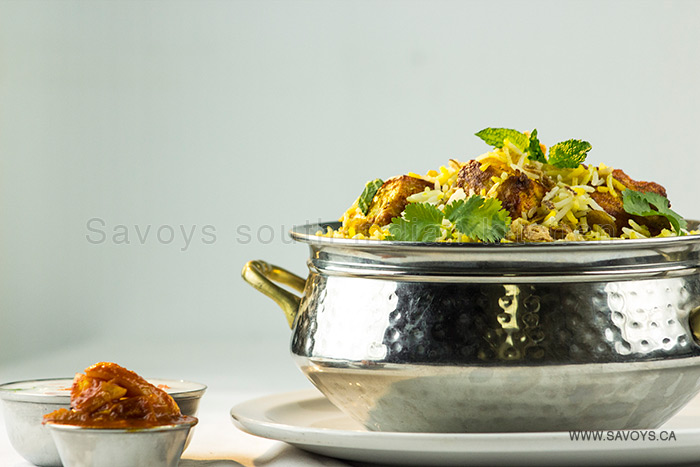 Aromatic basmati rice is dum cooked with prawns, herbs, and spices in this delectable meal. It is simply another variation made on the same line by replacing meat varieties.

It is much simpler than other biryani varieties. Coconut milk will replace yogurt in the gravy, giving the Biryani its distinct fragrance, texture, and flavor. The juicy and fullness of the Biryani is because of the perfect cooking of the prawns. 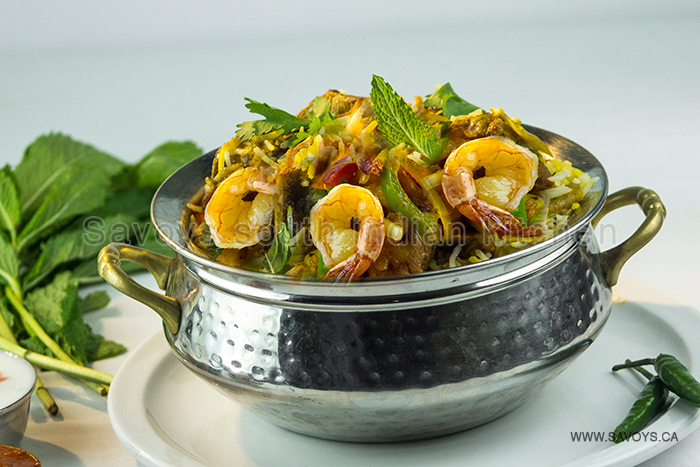 Pot biryani is also known as madkka or kudukka type biryani. Madkka is a kind of earthenware entirely composed of clay. This dish needs slow cooking, instead of baked. Inside the Madkka, maintaining its natural taste and nutrient benefits while also being tender and evenly cooked.

Moreover, Madkka-style meat and vegetable biryani are well-known throughout the country. Nonetheless, in Savoys, you can discover seafood biryani prepared in the Madkka manner. Such as Madkka-style fish and prawn biryani. 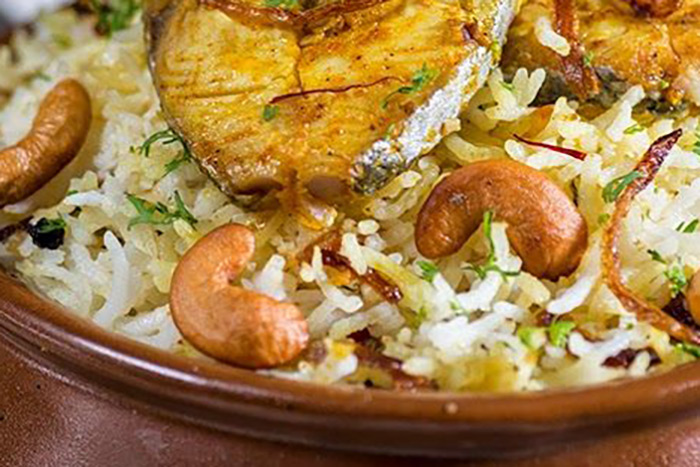 Later, season the sautéed veggies with salt and lemon juice and serve beside the fish.

The grilled fish tastes well with steamed rice or Jeera rice as a starter or side dish. 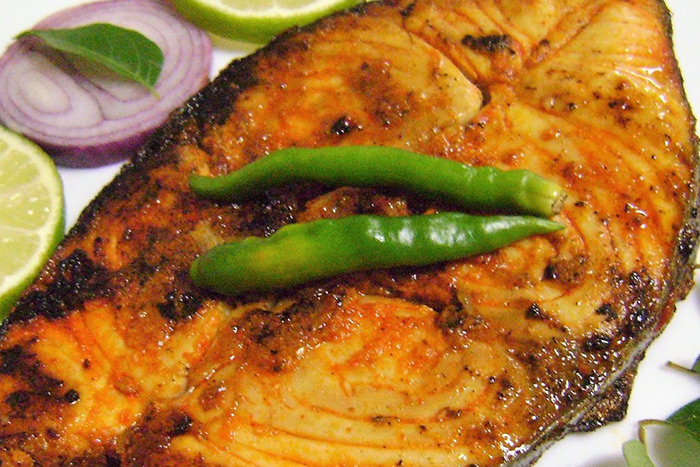 In short, Edmonton Savoy’s is the greatest spot to go for all kinds of seafood in south Indian cuisine. We prepare each recipe with extreme care. Each food variety had its different ingredients, which contributed to their flavoring and delectability. The one and only Savoy’s is where to go if you want to experience authentic Kerala delicacies.